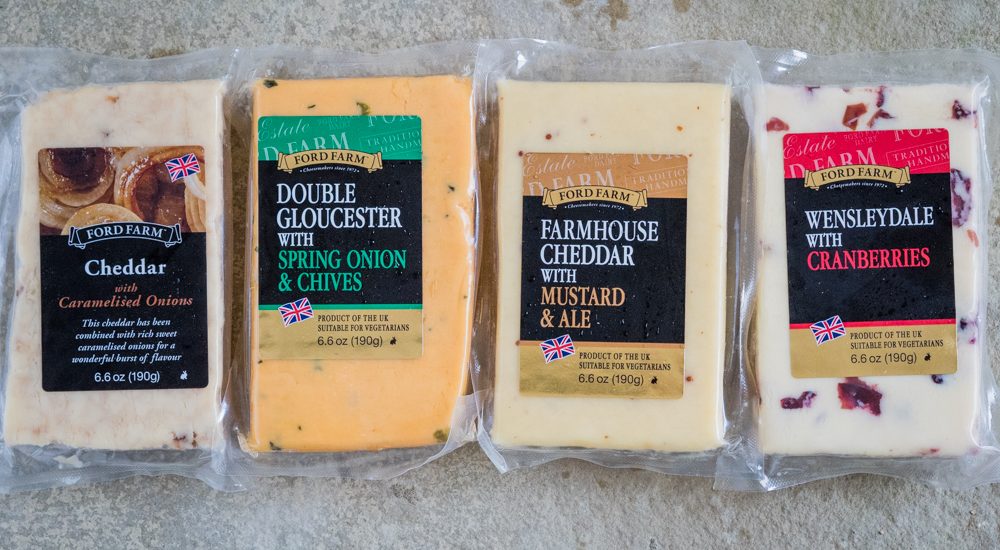 I was delighted to be invited for a tour and tasting at Ford Farm Cheese – not one to miss out on a cheese tasting opportunity, John came along under the guise of chief photographer. I have to admit to a soft spot for Ford Farm Cheese. As a child my parents were dairy farmers in the Bride Valley on land adjoining the Ashley Chase Estate (Ford Farm). Milk was collected daily from all the farms in the valley by a little tanker pulled by a tractor to be made into cheese at Ashley Chase.

Since then the company’s rise has been somewhat meteoric; now part of the Barber group and with an American division, Ashley Chase USA – 40% of sales are export, with strong sales in the USA and Australia in particular. They have twice won the Queen’s Award for Enterprise for their international trade.

On arrival we were welcomed in by Managing director Mike Pullin and Heloise D’Souza PR, who treated us to a tasting of a selection of the company’s core products. Along with one or two curve balls- a cheese flecked with chocolate, destined for the American market tasted, oddly enough, of marmite! There are some more conventional flavours on offer – the cheddar with caramelised onion and Wensleydale with cranberries are firm favourites in our house at Christmas.

There are several cheddars in the company’s repertoire, including both block and traditional cheddars. One of only 14 cheese makers in the South West licensed to produce P.D.O. West Country Farmhouse Cheddar, Ford Farm Cheese are passionate about preserving traditional techniques. They now produce around half of all the Traditional Farmhouse Cheddar in the country, around 600 tonnes annually, which in comparison to the 279,000 (DEFRA 2014) tonnes of block cheddar made each year nationally, makes it a rather rare find.

A rather unique selling point is that they are the only P.D.O cheddar maker to age in caves, a long neglected technique originally used prior to the advent of modern refrigeration techniques. Crowned Supreme Champion at the 2011 International Cheese Awards, Nantwich and best English cheese in 2014, Wookey Hole Cave Aged Farmhouse Cheddar is a source of great pride for Head Cheese maker Martin Crabb and all the team at Ford Farm. The 15 month old example we tried, was, John and I agreed, the finest cheddar we had tasted in some time. A full flavoured cheddar with slight complexity – a slight tang and nutty overtones; you can almost taste the earthy depth of the cave on the palate.

The cheddar is first stored in their own custom made cave at Litton Cheney and then transferred at around 9 months to Wookey Hole where it spends a minimum of 3 months, emerging fully ripened at 12-15 months. We were able to see the young cheeses in situ at Ford Farm and sample a fine work in progress. They make rather a dramatic site, row upon row of 27kg cylinders of cheddar. Wrapped in cheese cloth, the cheeses grow a thick blue coat, absorbing the musky, earthy flavours of the cave. The cloth is removed before sale but the unique imprint of the cave endures. The cheese cave at Wookey Hole now forms part of the visitor attraction and is, I am told, well worth a visit – I shall be scheduling a trip for myself for certain.

Also aged at Wookey Hole is the Cave Aged Goat’s Cheddar. Following on from the success of Billie’s a mild cheddar style goat’s cheese, with a subtle goaty flavour, Ford Farm started to experiment with a cave aged variety 2 years ago. Made exclusively with Goat’s milk from Somerset’s Bromes Farm, it has a rich, earthy and nutty flavour with caramel top notes and is the only cheese of its kind to be aged in caves in the UK. Mild and hay-free, these are goat’s cheeses for the goat shy!

Coastal is Ford Farm Cheese’s popular block cheese, a sweet even flavoured cheddar, it often contains calcium crystals which naturally occur with age, giving it a pleasant gritty crunch. We also sampled Dorset Red, a naturally oak smoked cow’s milk cheese, with a red Leicester hue (provided by annatto, a natural colouring). Oakwood, which is smoked for up to 24 hours, has a deep autumnal bonfire smokiness and is a bit of a personal addiction.

Despite having a presence in numerous major supermarkets, including Tesco, Waitrose and Walmart, the company has stayed true to its roots. All the milk used to produce its cheese is sourced from 11 Dorset farms, with a total herd of 3000 cattle. Managing director Mike Pullin recognises the crucial role of the raw ingredient, explaining that ensuring consistent quality is a priority. One farm has even invested in a mobile milking parlour – the cows no longer have to walk to the parlour which results in less stress for them, in turn improving the quality of the milk. Although the cows produce 25% less milk, the solids are 33% higher – ideal for cheese making.

A prime example of the indelible link between raw ingredient and end product is the premium brand Premier Moo which is available at Tesco seasonally. Every farmer eagerly anticipates the release of their herd onto the fresh pastures of spring – it’s a magical site, watching the cow’s first leap, comically lolloping onto the lush grass, having spent the winter silage-fed under shelter. The milk produced as a result of all this abundant spring grass is considered the best of the year. It’s the cheese equivalent of Premier Cru.

Our fill of cheese had, hair netted and hygienic safety shoes donned, we were whisked off for a tour of the site. As we stepped onto the cheese floor, the strong scent washed over me with a wave of nostalgia. In the run up to Christmas local teenagers were recruited to help in the factory. Each Saturday my sister, best friend and I arrived at the dairy, courtesy of the taxi of Mum and Dad at some ungodly hour (or so it felt at the time) blowing on our freezing fingertips and shivering in too thin coats. I listened to the 2003 rugby world cup amongst the camaraderie of the factory floor, swept up in the excitement, as I stood in line wrapping labels around red waxed logs of cheese. It’s the one and only time I’ve ever got into the rugby. It’s testament to the family feel of the company that many of those same staff members remain today. This year, in anticipation of the Christmas rush staff numbers will swell from 90 to 140.

Much of the work is still done by hand, from the cheddaring and salting to the labelling. On the factory floor, a team of workers were cutting cheddar into wedges. The trimmings will be sent to make Cave Aged Biscuits for Easyjet and to make their various extruded cheddars, whereby the cheese is reformed to give a creamier finish. A star shaped extruded cheddar will be making its way to Tesco in time for Christmas. As we wandered through storeroom upon storeroom stacked high with tonne upon tonne of cheese; block or traditional, flavoured or waxed, to be sent to any one of over 15 countries worldwide; to Walmart, to Waitrose, to the local farm shops and food fairs; I felt a glow of pride for our little corner of West Dorset, standing up on the world stage and shining.

My fellow cheese wrapping friend will be getting married next year, her centrepiece, a mountainous Ford Farm Cheese cake of course – what else?