Review of the Bankes Arms Hotel in Corfe Castle

Review of the Bankes Arms Hotel in Corfe Castle

The village of Corfe Castle is quintessentially British – windy roads, cobbled pavements, tea rooms, pubs, sweet shops, a lovely church, steam trains …and a huge ruined castle! I have visited as a tourist but I have not eaten more than an ice cream so relished the chance to take up the invite from the Bankes Arms Hotel for a spot of lunch.

Corfe Castle itself is thought to have been built in the 11th Century and is one of the earliest castles in England to be built (at least in part) using stone. Commanding a gap in the Purbeck landscape, the castle played an important part in British defences but was ultimately destroyed in a siege during a battle in 1643 in the English Civil War.

At that time, the Bankes family owned the castle (along with much of Dorset) and rather than restore the castle, they chose to build a new home on the Kingston Lacy estate instead (which you can also now visit, just outside of Wimborne). The castle remained in the Bankes family until 1981 when Ralph Bankes died, bequeathing the castle, much of the village of Corfe Castle and the Kingston Lacy estate to the National Trust (who still own it today).

The Bankes Arms Hotel is believed to have been a public house since the 16th Century and in that time has had just 16 license owners in those 350 years! With 10 boutique rooms to stay in and a restaurant with large pub garden, the Bankes Arms Hotel has a commanding position in the centre of Corfe Castle village. 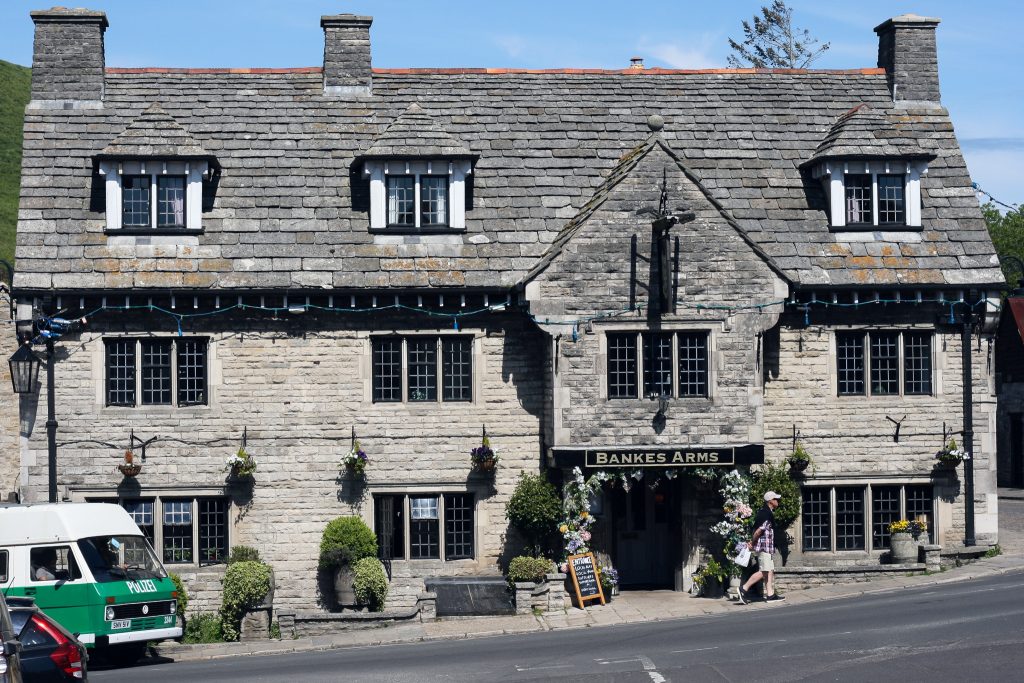 The large, sunny, pub garden has beautiful views across to the Castle itself, as well as being ideally located just by the steam train station (which you can catch from Swanage via Swanage Railway). As beautiful as the garden is, we grabbed a lovely table inside, worried that we might get caught in another quintessentially British thing… the rain!

The menu is what you might expect from a traditional pub menu with a nice mix of sandwiches, light bites, wraps and larger meals. Prices range from £6 for a light bite, £7 for a sandwich (plus £3 for chips) to upwards of £14 for a larger main meal. There is also a lovely range of local drinks available behind the bar.

We started our lunch with a small bite of the crispy baby calamari with sweet chilli sauce. Then we sampled between us the steak burger, a fish finger sandwich and chips, an 8oz Jurassic Coast Farm Flat Iron Steak with peppercorn sauce and the Mediterranean vegetable linguine with vegan mozzarella.

It was a busy day in half term and the pub garden was full of constantly changing guests as they came and went, enjoying the sites, which is always a challenge for restaurants to cope with (especially at the moment!) but it was nice to see our meals arrive hot and the plates full. The chips were chunky, fluffy and crispy and the food was enjoyable.

We squeezed in a pudding between us of a lemon tart with some extra pots of vanilla ice cream and it was a lovely way to finish off the meal (puddings are £6). We could have also had fresh coffees (they did smell good) but we couldn’t quite fit those in.

The Bankes Arms Hotel in Corfe Castle is traditional pub restaurant and if you are looking for somewhere to grab a bite to eat, overlooking the beautiful Castle ruins and soak up some of that history, then this is a great place to visit. Please note, that in peak season, you may need to wait for a table.

Heather was invited to The Bankes Arms Hotel in Corfe Castle and was gifted a meal for her family of 4.

The Bankes Arms Hotel in Corfe Castle features on our Directory of over 600 Dorset based food and drink businesses.